Global macadamia production in 2016 finished at 175,000 tonnes (in shell, 3.5% MC), delivering a total volume similar to that of 2015. The main producing origins were Australia, South Africa, Kenya and the United States, collectively representing 75% overall. Production in Australia and the United States grew by 8% and 9% respectively while South Africa fell by 17% as a result of severe drought conditions. Emerging origins including China accounted for an estimated 12% of in shell production.

According to the International Data Collection statistics collated by INC, in shell sales accounted for 20-25% of total global production in 2016 and kernel production increased slightly.

Tree nut production is expected to also grow with initial forecasts of 5.8% according to INC with the best increases coming from pistachio producers.

Total kernel sales in 2016 were down slightly compared with 2015 at 9,673 tonnes. The domestic and Japan markets performed strongly, up 4% and 8% respectively and representing 53% of kernel sales overall. Australia’s share of the Japan market increased in 2016 to 64%, highlighting a continued preference for our product. Investment in new product development is continuing to unfold in this market and Meiji’s 40th anniversary of its macadamia chocolate product highlighted the importance of macadamias in the product portfolios of major confectionary manufacturers. Consumer research undertaken in 2016 also found that macadamias are increasingly consumed in a snack format, signalling expanding product usage and formats.

Kernel sales to South Korea performed strongly again in 2016 and Australia retained a dominant market share of 99%. Many new products launched during the year and there are no signs of this abating in the near-term. Consumer research undertaken in 2016 found that Korean consumers’ awareness, experience and consumption frequency of macadamias have all risen significantly over the past five years and they have a much clearer understanding of the features and benefits of our product.

Australian kernel sales to China are increasing to meet rising demand for a more convenient product format than in shell, although development of the kernel market is expected to take some time. Most kernel sales are made online rather than through bricks and mortar retailers.

Australian kernel sales to Taiwan declined in 2016, as did total imports to this market. More competitive than some of the other Asian markets, last year also saw a significant increase in trade between Taiwan and China. Despite this, Australia retained a strong share of 46% in 2016.

Australian kernel sales to the USA were down significantly in 2016, as were total imports. This followed an unusually big year in 2015 when kernel imports reached an all-time high, exceeding 12,000 tonnes. Market intelligence suggests this was an anomaly with 2016 results signalling a return to normal sales volumes and total imports sitting at just over 7,000 tonnes. Current performance is tracking soundly.

Australian kernel sales to Europe were down in 2016 although total kernel imports rose, exceeding 6,000 tonnes. While macadamia use is becoming more widespread throughout Europe beyond Germany, sales of Australian kernel are being targeted more to Asian markets at this point in time.

Australian in shell sales increased by 8% in 2016, with robust demand driven by the limited availability of product from South Africa, whose in shell sales declined by around 50%. Strong demand is expected to continue into 2017. 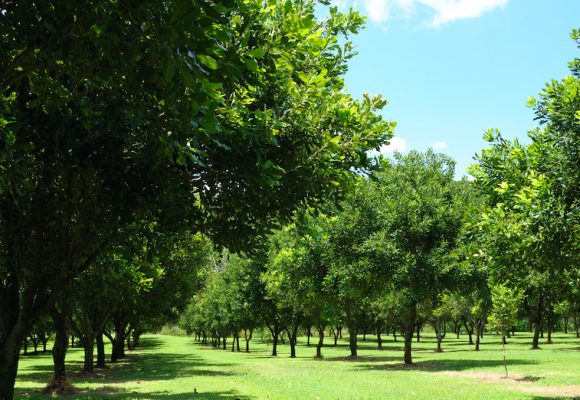